Coastal Resources, Inc. (CRI) completed a wetland delineation, Phase 1 bog turtle survey, and QBTS construction monitoring in support of environmental permitting and construction for the Conastone to Maryland Line Rebuild project. The project transmission corridor is approximately 4.8 miles in length extending approximately 3 miles from the Conastone Substation just east of MD 23 in Harford County to the Gorsuch Junction at West Liberty Road in Baltimore County and then turning northward to the Maryland state line for an additional 1.8 miles.

CRI identified and GPS located a total of nine wetlands and eight waterways within the study area in accordance with the Regional Supplement to the Corps of Engineers Wetland Delineation Manual: Eastern Mountains and Piedmont Region, Version 2.0.  Data were collected at wetland test plots that characterized hydrology, soils, and vegetation, within the identified wetland types and Cowardin classifications.  For data collection and reporting, wetlands were grouped by similarities in hydrophytic vegetation, hydric soils, and hydrologic regime, including hillslope seeps and floodplain depressions, and CRI assessed wetland functions using best professional judgment.

Coordination with the Maryland Department of Natural Resources (DNR) indicated the potential presence of the federally listed Bog Turtle (Glyptemys muhlenbergii) within the project study area.  Consequently, one of CRI’s Qualified Bog Turtle Surveyors conducted a Phase I Bog Turtle Habitat Assessment concurrent with the wetland delineation.  All areas identified as wetlands were investigated for their ability to support bog turtle habitat.  Suitable bog turtle habitat is typically comprised of spring-fed hydrology or long duration inundation/saturation resulting in the formation of mucky soils and primarily emergent plant communities.  To determine whether suitable bog turtle habitat was present within each identified wetland, each wetland was walked to assess its source of hydrology, measure the depth of any mucky soils, and to describe the vegetation community.  All information was documented on standardized Phase 1 bog turtle field forms and representative photographs were taken.  A Phase I survey report was prepared and submitted to the DNR that indicated that six wetlands contained fair to good bog turtle habitat, two wetlands had low to very low-quality habitat, and one wetland was unsuitable habitat.  With the confirmed presence of suitable habitat, and given the proximity of known, occupied bog turtle wetlands within the area, it was deemed possible that some of the wetlands within the study area with more suitable habitat could support bog turtles.

Due to the findings of the Phase I Surveys and based on further coordination with DNR, the project was required to implement avoidance and minimization efforts, such as protection fencing, time of year restrictions, and use of a Qualified Bog Turtle Surveyor (QBTS) to avoid a potential take of the species.  Bog turtle protection fencing was used to separate four of the suitable wetlands from an existing access road and CRI staff served as the QBTS onsite during the installation of protection fencing.  A sweep for the presence of bog turtles was made along the alignment of the proposed protection fencing for each of four suitable bog turtle wetlands prior to fence installation.  No bog turtles were found, and all fencing was completed.  The QBTS also instructed the onsite construction inspector in procedures to conduct daily sweeps of the fence lines to look for and safely collect any bog turtles trying to enter or leave the LOD once actual utility construction begins.  A report was prepared that summarized the results of the bog turtle QBTS efforts. This report was submitted to DNR as required by the scientific collection permit obtained as part of the QBTS monitoring effort. 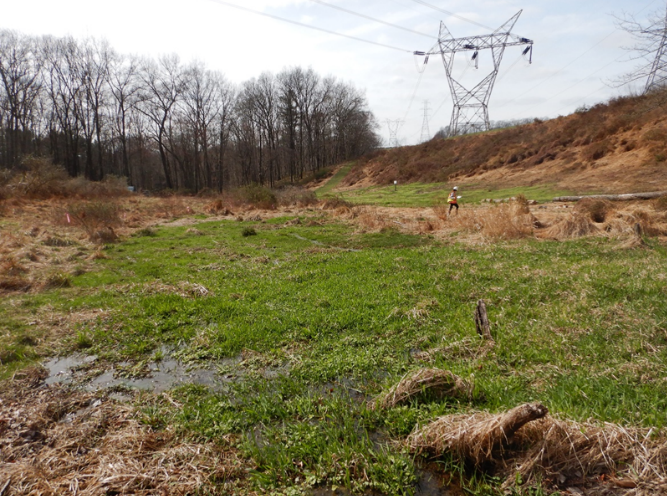 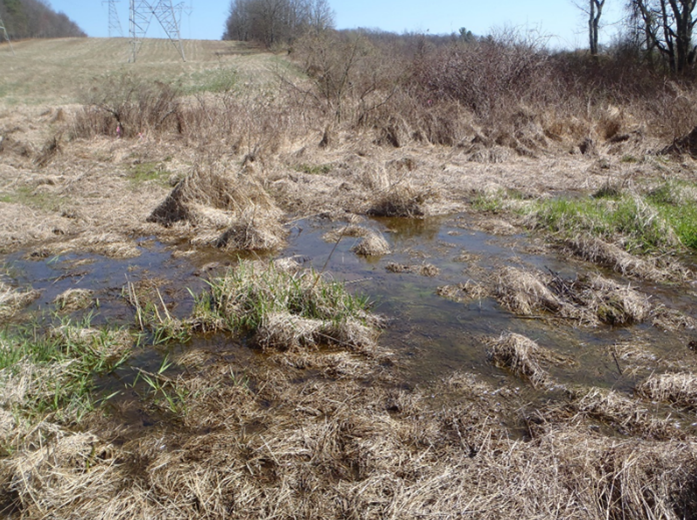