Coastal Resources, Inc. (CRI) provided environmental services as part of an interdisciplinary restoration team for a Total Maximum Daily Load (TMDL) stream restoration project located in Carroll County, MD.  The intent of the project is to develop Impervious Acres Treated (IAT) Credit for the benefit of the Maryland Department of Transportation State Highway Administration (MDOT SHA).  The project will help MDOT SHA meet the requirements of the Chesapeake Bay TMDL through compliance with the requirements established in Maryland’s Watershed Implementation Plan for the Chesapeake Bay Total Maximum Daily Load (WIP).

The Gunpowder Falls and Muddy Creek project is in Manchester, Carroll County and consisted of the restoration of approximately 8,000 LF of Gunpowder Falls, Muddy Creek, and 3 unnamed tributaries.  As part of the environmental screening for the pre-construction phase of this restoration project, CRI completed various field studies to document the potential presence of rare, threatened, and endangered (RTE) species.

The initial RTE study was a Phase 1 assessment of potential habitat for the state and federally threatened bog turtle (Glyptemys muhlenbergii), known to occur nearby.  Suitable bog turtle habitat includes spring-fed hydrology, mucky hydric soils, and seasonally to permanently saturated emergent wetland vegetation.  Several wetlands were identified within the project limits that met these suitable bog turtle habitat criteria.  Following the assessment, a Phase 1 report was prepared and submitted to the Maryland Department of Natural Resources (DNR) as part of the environmental review.  During the environmental review, DNR recommended that the wetlands identified as supporting suitable bog turtle habitat receive a Phase 2 presence/absence bog turtle survey. CRI conducted the four required Phase 2 bog turtle presence/absence visual surveys between April 15 and June 15, 2018.  During the initial Phase 2 survey within a pasture wetland exhibiting the best bog turtle habitat conditions, CRI’s qualified bog turtle survey team captured six bog turtles.  Documentation of bog turtles within the wetland represented a newly discovered population in Maryland.  After completion of the four surveys, that bog turtle population totaled at least 24 individual turtles ranging in age from hatchlings to older adults.  CRI then prepared a detailed report that summarized the results of the Phase 2 survey that was submitted to DNR.

To avoid potential take of the federally listed turtles, the federal/state wetland permit outlined specific conditions that must be followed when conducting the stream restoration near the occupied bog turtle wetlands.  One of the conditions specified the use of a Qualified Bog Turtle Surveyor (QBTS) to monitor within the limits of disturbance prior to and during restoration, to ensure that bog turtles were not impacted because of construction activities.  CRI has three QBTS on staff who participated in the monitoring of the stream restoration work near the bog turtle wetland.

To further protect bog turtles from potential harm during stream restoration activities, DNR required the work to be done during the winter hibernation period when turtle activity would be limited. Also, at DNR’s request, the project sponsor agreed to purchase 10 radio transmitters to be placed on representative adult male and female bog turtle shells.  The transmitters would allow tracking of turtle movements across the site prior to construction to determine whether turtles used the stream designated for restoration or other areas within the limits of disturbance, outside the areas where turtles were captured during the two-month Phase 2 survey.  This information would better inform the restoration design.  CRI QBTS biologists assisted DNR with the early telemetry study by tracking each transmittered turtle every other week during the fall of 2019.  The location of each turtle was surveyed during each tracking event using a Trimble GPS unit.  This effort led to the discovery of novel habitat use areas beyond where turtles had been captured during the Phase 2 survey, including from areas proposed for restoration, informing slight modifications to the proposed design to avoid potentially impacting turtles. Just prior to hibernation, CRI assisted DNR in attaching iButton temperature loggers on the transmittered turtles to record temperatures of hibernating turtles.  Tracking the temperature data of the turtles with that of the ambient air and water then allowed an assessment of whether winter stream restoration work may cause hibernating bog turtles to prematurely surface, potentially resulting in health complications and death from freezing surface temperatures.  Transmitters were tracked once a week until the end of the hibernation period (approximately March 1).  All telemetry data were post-processed to determine the extent of movements and locations of hibernation for each turtle.  A summary report of the bog turtle telemetry and QBTS monitoring study was prepared and submitted to the DNR and Chesapeake Bay field office of the U.S. Fish and Wildlife Service (USFWS) following construction.

After the successful stream restoration, CRI assisted DNR with statistical analysis of the temperature data collected from the Gunpowder Falls and Muddy Creek project, as well as another similar stream restoration project in Cecil County. CRI’s analysis of the temperature data provided evidence that bog turtles were not prematurely awakened from hibernation because of the nearby construction, as bog turtle temperatures closely correlated to water temperature.  CRI also assisted DNR with preparation of an oral presentation about these projects delivered to the Northeastern Partners in Amphibian and Reptile Conservation meeting in August 2021.

In addition to the RTE work, CRI conducted a wetland/waters delineation, forest stand delineation, and benthic macroinvertebrate survey and community analysis for the project. CRI provided a stream restoration staff expert to support the functional assessment/geomorphic field work including cross sections at Gunpowder Falls and Muddy Creek.  CRI also assisted with the preparation of the Federal/State Joint Permit Application (JPA), baseline functional uplift report, and monitoring plan for the project. 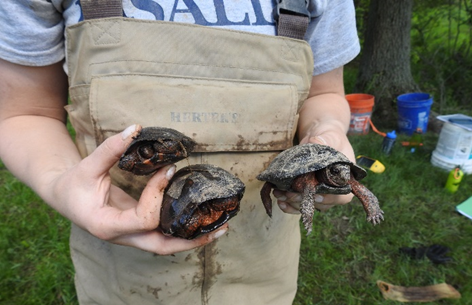 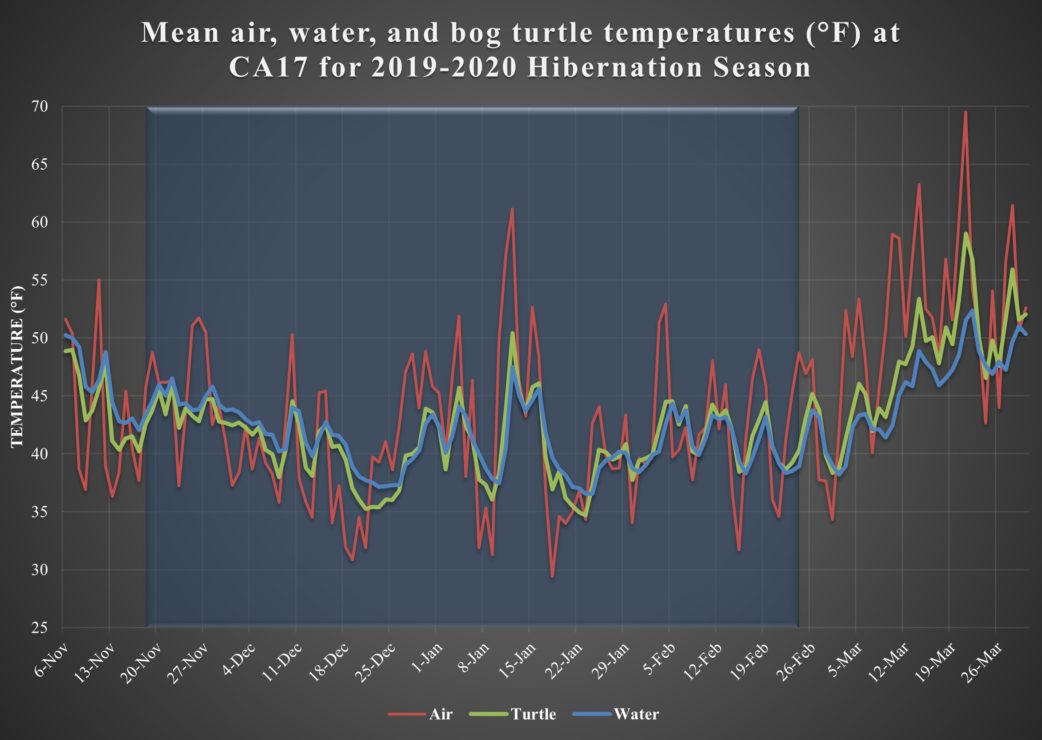 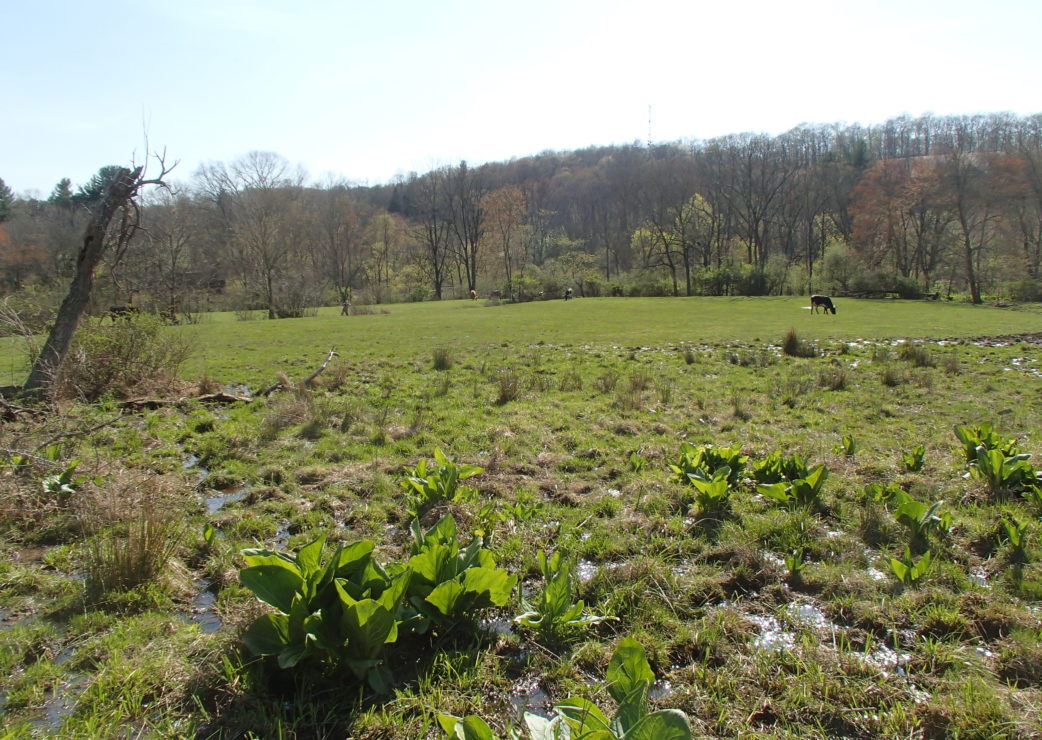