Coastal Resources, Inc. (CRI) conducted wetland monitoring at a suite of MDOT SHA and private mitigation wetlands to test the mitigation bank performance standards developed by the Interagency Review Team (IRT) that were implemented in 2016. The IRT is comprised of members of the U.S. Army Corps of Engineers (USACE), Maryland Department of Environment (MDE), U.S. Fish and Wildlife Service (USFWS), and U.S. Environmental Protection Agency (USEPA). SHA was concerned that the performance standards, particularly as they pertain to the forested vegetation component, were too limiting to be reasonably met and sustained in perpetuity. To evaluate the veracity of this concern, MDOT SHA sought to monitor various mitigation wetlands at least five years old or older to determine if even these long-established sites could meet the standards.

CRI identified potential mitigation wetlands that met the age and forested cover-type criteria using a Geographic Information System (GIS) approach and selected seven (7) MDOT SHA mitigation sites and three (3) private mitigation sites for evaluation. All sites occurred either within the Coastal Plain or Piedmont physiographic provinces. CRI then prepared base mapping of each of the sites, including limits of the overall mitigation area and of each wetland cover type as appropriate. Based on the IRT guidance, the recommended number of 20-foot radius plots, were then randomly placed within each mitigation site using a random number generator and mapping tool.

In the field, each plot was monitored to assess aerial cover of vegetation, species richness, density, height of five tallest trees, and presence of invasive species in accordance with the IRT standards. Photographs were taken from plot centers in each of the cardinal directions to visually document conditions. Following the field data collection, site data were summarized, and the data from each plot was compared to the IRT performance standards. The overall results indicated that no single mitigation site met all performance standards for every plot.  Similarly, the mature natural preserved wetlands that were monitored also did not meet all standards in all plots.  These findings identified potential issues with the performance standards, the most prominent of which were:

The study also led to a number of important “lessons learned” for mitigation success as well as recommendations from SHA to the IRT on potential changes to the performance standards to address the issues identified by the study. 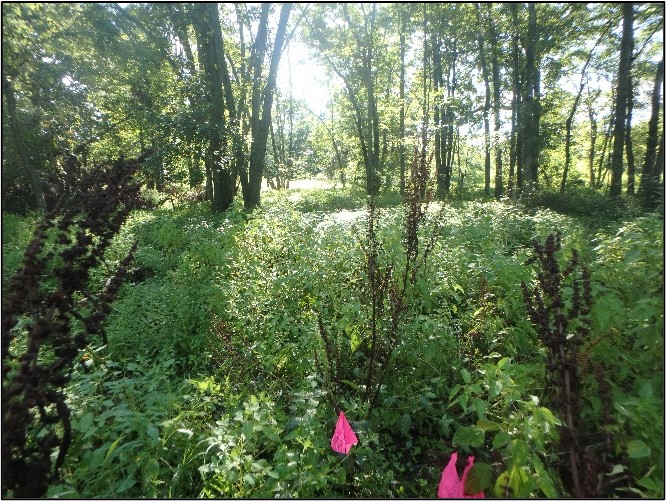