SR 2 Elkton Road from the Maryland State Line to Casho Mill Road – Phase 1 bog turtle habitat assessment surveys were completed for this project.  Eleven (11) wetland systems or stormwater management (SWM) ponds were surveyed along the 1.5-mile-long study corridor in southwestern New Castle County, DE.  Standardized Phase 1 bog turtle habitat survey data forms were completed in the field for each assessed wetland/SWM pond.  For each system, the presence of suitable mucky soils, hydrology, and vegetation were assessed.  None of the assessed wetlands/SWM ponds were found to contain suitable bog turtle habitat.

Bridge 1-421 on Maryland Line Road over Tributary to Sassafras River – A Phase 1 bog turtle survey was also completed for Bridge 1-421 in Townsend, DE.  Four wetlands within the floodplain of the unnamed tributary stream were assessed for their suitability to support bog turtles.  All four wetlands had some areas of suitable bog turtle habitat.  In early December 2019, CRI completed a Phase 1 bog turtle assessment for the Pyles Ford Road culvert replacement project in northern New Castle County.  The project included the replacement of two culverts along Pyles Ford Road separated by about 1,000 feet.  Sixteen (16) wetlands were assessed within the project study area, and four (4) wetlands adjacent to southernmost box culvert were determined to be suitable bog turtle habitat.  Reports were prepared for DelDOT that summarized the results of the Phase 1 surveys.  These reports were submitted to the Delaware Department of Natural Resources and Environmental Control (DNREC) for their review and concurrence.

QBTS Services for Culvert Replacements – CRI also served as the QBTS for two culvert replacement projects in Northern New Castle County.  For both projects, DNREC conditioned the wetland permits to include a QBTS monitor to screen the work areas for the presence of bog turtles each day prior to the start of work within the stream or adjacent wetlands.  One project, Snuff Mill Road, was completed during the early fall of 2019.  For this project, bog turtle protection fencing was installed between the suitable bog turtle wetland and the culvert replacement.  The QBTS looked for the presence of bog turtles along the fence line and under the stream banks each day.  The second project, Pyles Ford Road, was completed during the winter of 2021.  This project involved the replacement of an old box culvert with a new concrete box culvert.  CRI’s QBTS conducted daily searches of the stream banks and an adjacent wetland swale within the LOD.  For both projects, photographs were taken of the culvert replacement operation stages and notes were written on project progress each day.  No bog turtles were found during the work at either project location.  Summary reports were prepared following the completion of each project and submitted to DNREC for concurrence in compliance with the permit conditions. 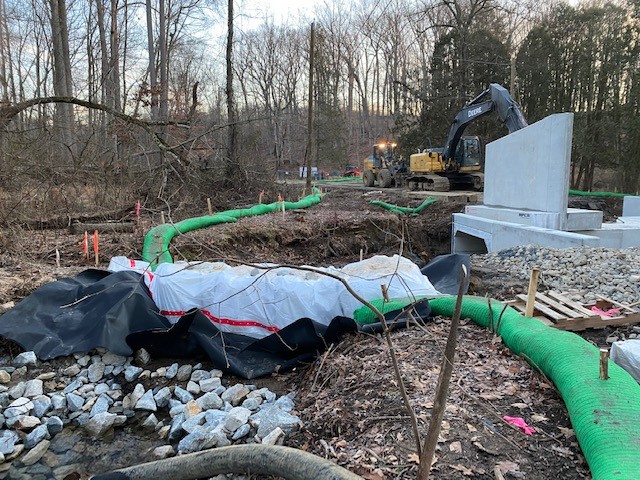