MDOT SHA provided roadkill data from their district shops, which is collected during roadkill clean up and removal.  This data was analyzed to determine where high levels of roadkill occur within the state to begin prioritizing areas for wildlife mitigation, both to reduce impacts to wildlife and to minimize vehicular/human damages caused by wildlife collisions.  These data were compared to upcoming MDOT SHA projects to determine if wildlife mitigation measures (fencing, road deterrents, etc.) would be appropriate for implementation on projects that were planned for final design and construction in the near future.

Two rounds of roadkill analysis were conducted in GIS.  This effort utilized roadway traffic rates, publicly available protected land data, and the roadkill collection data.  The results of this analysis were then used to select a subset of roadways and/or bridges to review in the field for potential fencing locations, signs of roadkill activity, and other information that could be provided to MDOT SHA planning and design for wildlife mitigation.  Four projects were reviewed and recommended for wildlife mitigation, two of which are expected to have mitigation measures implemented.

Following the initial task, MDOT SHA requested that CRI continue to review areas with wildlife collision issues that may not currently be slated for construction but could be in the future.  As all of the projects that had been recommended by CRI to MDOT SHA for mitigation were bridges or other waterway crossings, bridges were a logical choice for review, as their replacement and reconstruction can allow for wildlife passage and fencing can often be installed to divert wildlife to cross underneath the bridge structures.  Utilizing MDOT SHA Bridge location information, all bridges were analyzed for their potential for wildlife mitigation.  Factors of analysis included protected lands within the vicinity of the bridge, traffic counts and roadkill counts surrounding the bridge, and bridge characteristics such as height and roadway type, to name a few.  All bridges, along with all previously reviewed projects, were entered into a specially designed wildlife mitigation geodatabase and a short-list of bridges that met the desktop analysis criteria for wildlife mitigation potential was developed for use in the field.  The geodatabase contained pertinent fields regarding the bridge structure and/or upcoming project, as well as why it did or did not meet the mitigation criteria during desktop review to move forward to field reviews.  All of the sites that had been previously field reviewed had the field data entered into the geodatabase, and all sites that were further deemed appropriate for mitigation following the field visits had final notes added, for the support of design teams as the projects move towards construction. 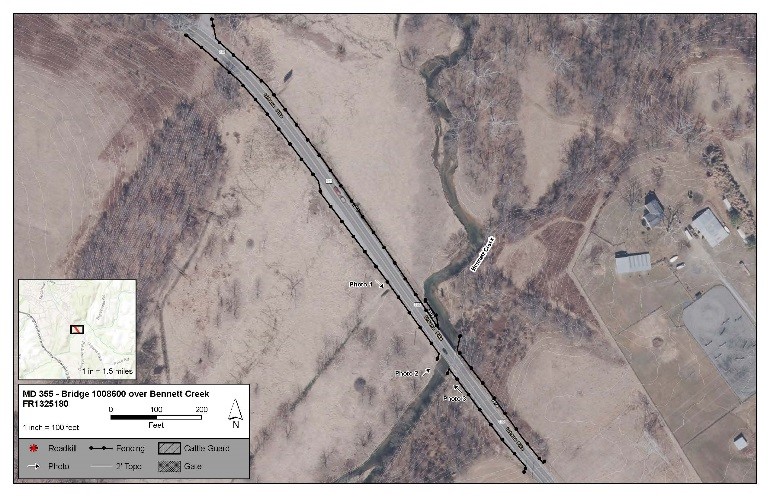